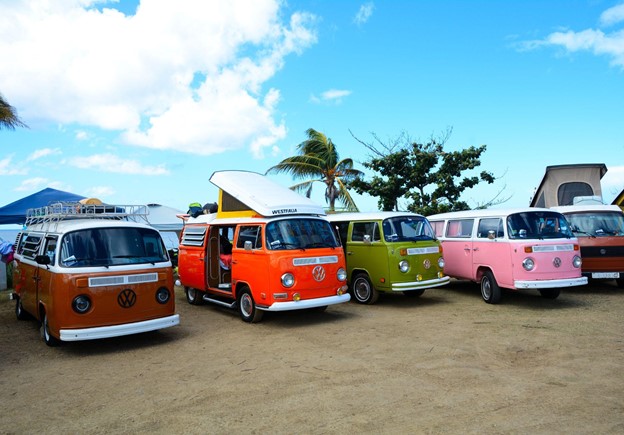 There is no doubt that the VW (Volkswagen) van is the quintessential camper van. It has become an icon of culture and counter-culture, and is synonymous with the hippie movement and lifestyle. Originally popular in the 1960s, it's becoming more popular today throughout the age groups.

VW camper vans have been around since 1950. The VW Transporter concept was born then and was later recognised as the most suitable vehicle to convert into a camper van.

The VW camper van is popularly known for its distinctive shape, vibrant colours and recognisable VW logo. The vehicle has become a symbol of adventure, outdoor pursuits and long-distance mobility. The love of these classic vehicles has inspired an entire culture, which is why VW camper vans continue to be popular up until today.

In the 1940s, Type 1, the VW Beetle, made its debut. Among its features are a luggage compartment, metallic painted panels and adjustable seating.

Volkswagen's Type 2 Transporter (T1) van was built in the 50's. Known as the Splitscreen, Splitty, Kombi, Microbus or VW Bus, Type 2 was a Volkswagen Beetle alternative.

T1 Transporters featured split windshields and had a variety of versions over the years. Several modifications have been made to the engine, wheels, cargo capacity and engine bay space. As of today, the Splitty remains a popular model.

In response to the success of the T1, Volkswagen released the T2 Transporter in 1967. Also known as the Bay Window or the Bay, the T2 had no split windshield and was heavier and broader than its predecessor.

It is equipped with a larger engine, 90° front doors, brake discs on the front and new sidebars, making it easier to get in and out. T2 provided a more comfortable ride, improved electrics and fast speeds up to 80 mph.

In 1979, Volkswagen began producing the T3, which is sometimes called T25, Transporter.

Compared to Type 2 Transporters, T3 was substantially larger. In terms of length and height, it was the same as the T2, except that it was wider and heavier. Additionally, it was more square than previous versions and had a distinct taillight design.

The T3 was equipped with many features, such as automatic transmission, air conditioning, power locks and heated mirrors. Front disc brakes on the T3 Transporter were larger than those on Type 2s. As part of its design, it had a stove, sink, refrigerator and a raised roof that could be popped up or fixed in place.

T4's production began in 1990 following the success of previous Transporters. This vehicle featured a water-cooled engine in the front, a first for Volkswagen Transporters.

There were a number of options available with this fourth-generation Transporter. You can choose from a standard or high-top roof, sliding doors, short or long noses and permanent four-wheel drive. During its 13 years on the market, the T4 enjoyed great success, primarily because it became a popular camper van base vehicle.

Unlike the earlier models, T5 was aerodynamically more advanced than its predecessors. A four-piece grille is also featured on the front. T5 vans were available in various configurations, such as short-wheelbase (SWB) and long-wheelbase (LWB). Meanwhile, rooflines were available in low, medium and high variations.

T5 Transporters had different seating options, such as those found in the Kombi, Shuttle, Caravelle and Multivan models. Vans from the Kombi range could fit 11 people. Next up were Shuttle vans, available in SWB or LWB. Shuttle vans also came with bench seating and brightly colored bumpers.

Most Kombi and Shuttle features were standard on the Caravelle. It can seat from seven to eleven people. Meanwhile, Multivans had six or seven seats and a sliding rail system to allow the seats to move around.

The T5 Transporter was updated with a new version known as the T5 Facelift because it was given cosmetic changes to the front end. Some of the changes included upgrading the engine to 180bhp and adding traction control.

A quick way to distinguish between T5 and T5 Facelift is by looking at the bonnet edge. In contrast to the T5 Facelift, the T5 has a small cut-out.

Numerous modifications have been made for this version, including a redesigned front bumper and grille, repositioned side repeaters, new lighting clusters and an enlarged rear window. Additionally, the car consumes 15% less fuel, offers a 7-speed dual-clutch automatic transmission and has a fatigue detection system.

Is It Worth Buying a VW Camper?

Quality is one of VW's strongest points. Transporter vans have reliable, durable bodies, allowing them to be converted easily.

Works well as an everyday car

VW camper vans are easier to drive than huge motorhomes. They are therefore suitable for both everyday use and travel. Considering their lightweight design, Transporter vans provide good fuel economy. They can also easily fit into standard parking spaces in public parking lots. There are VW vans best suited for couples or families with children, depending on the model you choose.

A VW camper van will allow you to travel wherever and whenever you want. It's not necessary to research and book accommodation; you can just start travelling! They also have onboard amenities, such as a kitchenette and storage area, for your convenience.

If you’re looking for a VW Transporter dealer, Big Van World is the place for you. Browse our Volkswagen van selection now.