Trends In The Van Market

It's estimated that there are currently around 4.6 million vans on UK roads - a 59% increase since 2000. A recent report by the Society of Motor Manufacturers and Traders (SMMT) highlights the economic and social contributions made by van owners and van users. The research conducting by BearingPoint revealed a number of interesting trends in the commercial vehicle market.

Vans Are The Backbone Of The UK Economy

In the UK, 3.4 million people use, or depend, on vans for their work which is around 10% of the entire country's workforce. The versatility and range of light commercial vehicles (LCVs) on offer - in terms of size and configurations - is able satisfy a range of different industries.

Unsurprisingly, the construction industry is responsible for running the largest share of commercial vehicles with just under 1 million of the vans on our roads belonging to traditional trades such as builders and electricians.

However, as a result of the boom in online shopping, the UK has become more reliant on vans to deliver goods and services to our home or place of work. According to recent research, 83% of people in the UK made an online purchase in the previous 12 months which is way above the EU average of just 60%.

This behaviour has started to fundamentally change the UK from a manufacturing economy to a service-based economy. As this trend develops, we will become more and more reliant on vans to complete the increasing demand on 'last mile' deliveries.

Since the introduction of the first Euro emissions standards (Euro 1) in 1992, van manufacturers have been encouraged and forced to develop cleaner vehicles to protect the environment and improve air quality. Indeed, since 2013, CO2 emissions from vans have reduced by 10.4%.

The latest Euro 6 emissions standards, which came into effect from September 2016, have dramatically reduced the level of harmful emissions - particularly nitrogen oxides (NOx) - that commercial vehicles are allowed to produce.

Manufacturers have worked hard to develop cleaner Euro 6 compliant diesel engines. The fact that 96.2% of vans on the road are diesel highlights the vital role that diesel will continue to have for the foreseeable future.

Vans continue to play an important role in the UK economy in their second and third lives with around 900,000 used vans sold every year. On average, commercial vehicles in the UK are around eight years old.

Typically, small and medium-sized enterprises (SMEs) and sole traders will invest in a slightly older van because they're cheaper than buying from new and have lower depreciation costs.

Although the new van market has an estimated worth of around £10 billion a year, the demand for used vans has increased. The rise in the number of self-employed people and a thriving sub-contractor sector in the construction and courier industries means that more used vans are being sold every year.

The shift in our buying habits from in-store to online has forced a significant change in the automotive industry with companies downsizing from heavy goods vehicles (HGVs) to LCVs.

In order to have more agile logistics solutions, companies have turned to large vans. Between 2003 and 2017, the demand for large vans tripled with the Ford Transit consistently being the most popular model.

Large vans are the most versatile type of commercial vehicle with most manufacturers offering their largest models in a range of lengths and heights to match the end user's needs. They have the capacity to carry big loads as well as being able to make deliveries into tight, congested urban areas.

There are two types of custom conversions that have become trends in the LCV sector: conversions to increase efficiency and lifestyle conversions.

In order to improve efficiency and professionalism, van owners have started to customise their vehicles with improvements such as bespoke racking, winches and on-board power sources.

Similarly, the boom in online food shopping has led to the major supermarkets investing in a fleet of refrigerated vans that are constantly on the road making deliveries.

Because of the amount of space they offer, vans are also being converted to provide and supplement an alternative lifestyle. For example, more vans than ever before are being used as food trucks with a range of specialist conversion companies available.

Some people have taken this lifestyle idea even further by converting a van into a mobile home. '#vanlife' has more than 5.4 million posts on Instagram with people documenting their adventures of living in a van. 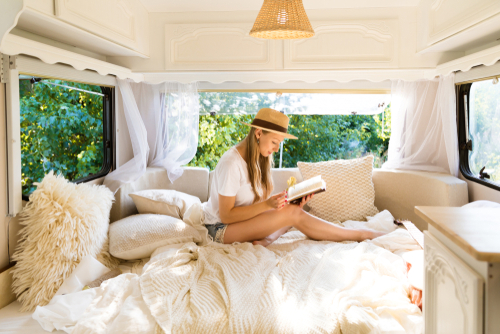 In 2018, electric vans only accounted for 0.3% of the new LCV market as owners worry about their ability to carry large loads, cover long distances and perform tasks on sites for prolonged durations.

On top of this, the current charging infrastructure in the UK isn't good enough to support van drivers and it isn't practical for them to constantly be brought home to charge overnight.

However, as the technology and infrastructure improves and develops, it's clear that electric vans will become an important part of this sector. Manufacturers have already started to introduce electrified versions of popular models which will only increase over the coming years as we head towards the Government's Road To Zero strategy.