London has already implemented an Ultra-Low Emission Zone (ULEZ) which covers the same area as the Congestion Charge and will be extended from October 26th 2021. Other UK major cities, including Birmingham, Manchester and Newcastle have suggested implementing similar systems to help achieve improvements in air quality at a more local level.

Having a van that meets the Euro 6 diesel standards will put your business in a strong position for avoiding any current and future emissions-related charges. The government's Clean Air Strategy is a tough and ambitious plan to tackle air pollution with a commitment to reduce NOx and Particulate Matter (PM) caused by diesel vehicles.

Understanding Euro 6 Emissions Standards & What They Mean For Van Drivers

All new vans manufactured after September 1st 2016 had to be compliant with the Euro 6 emissions standards. At this point, there are now a range of used Euro 6 compliant vans available, but it's difficult to know which ones will be best for your business.

A simple diesel particulate filter - which was made compulsory by the Euro 5 emissions standards - may be enough to reduce a small van's harmful emissions. Alternative, a NOx trap could be fitted to absorb oxides of nitrogen.

The Caddy is the smallest van in the Volkswagen commercial line-up. It's available with a new generation of diesel and petrol engines that all meet the Euro 6 emissions standards.

There are three versions of the 2.0-litre TDI engine on offer: 74bhp, 101bhp and 148bhp. Fuel economy for these units ranges from 55.4mpg up to 61.4mpg. The entry-level engine is only available as a manual, whereas the two more powerful versions can be paired with Volkswagen's dual-clutch automatic gearbox.

All the diesel engines benefit from the manufacturer's Selective Catalytic Reduction (SCR) technology which injects AdBlue solution to convert the harmful NOx into water and nitrogen.

Depending on how much space you need, there are two wheelbase options (Standard and Maxi), producing load volumes of 3.2m³ and 4.2m³ with a maximum payload of 857kg. 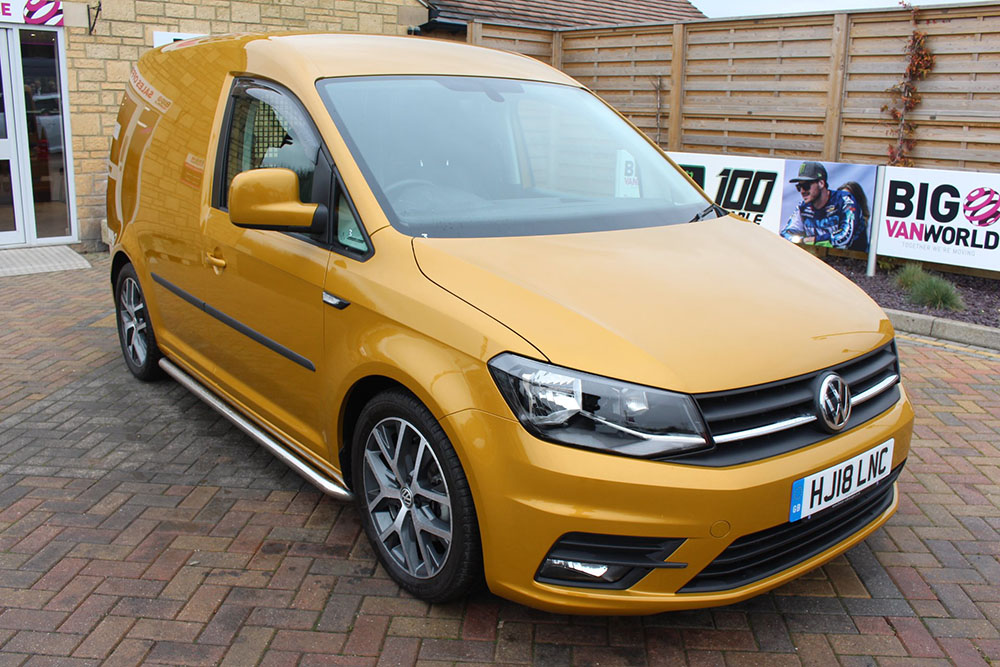 The Transit Connect is the smaller sibling of the Transit Custom and the original Transit van, but it's bigger than the diminutive Transit Courier van.

This small van received Ford's Euro 6 1.5-litre TDCi diesel engine as early as 2015 before the directive had even come into effect. Initially, a singular 100PS Econetic version was the only option available.

From Spring 2016, the previous 1.6-litre TDCi engines were replaced with 75PS and 120PS versions of the 1.5-litre engine which joined the existing 100PS unit. The advertised fuel economy figures range from 58.9mpg up to 68.9mpg.

The 120PS engine is a six-speed manual, whereas the two smaller versions come with a five-speed gearbox. Similarly, the 100PS and 120PS units can both be paired with Ford's Powershift automatic gearbox which posts fuel economy ratings of 56.5mpg.

There are two lengths available (L1 and L2) offering load volumes of 2.9m³ and 3.6m³ which can accommodate two Euro pallets even in the smallest version. Standard payload maxes out at 720kg, but this can be upgraded to just over 1,000kg with the optional High Payload modifications. 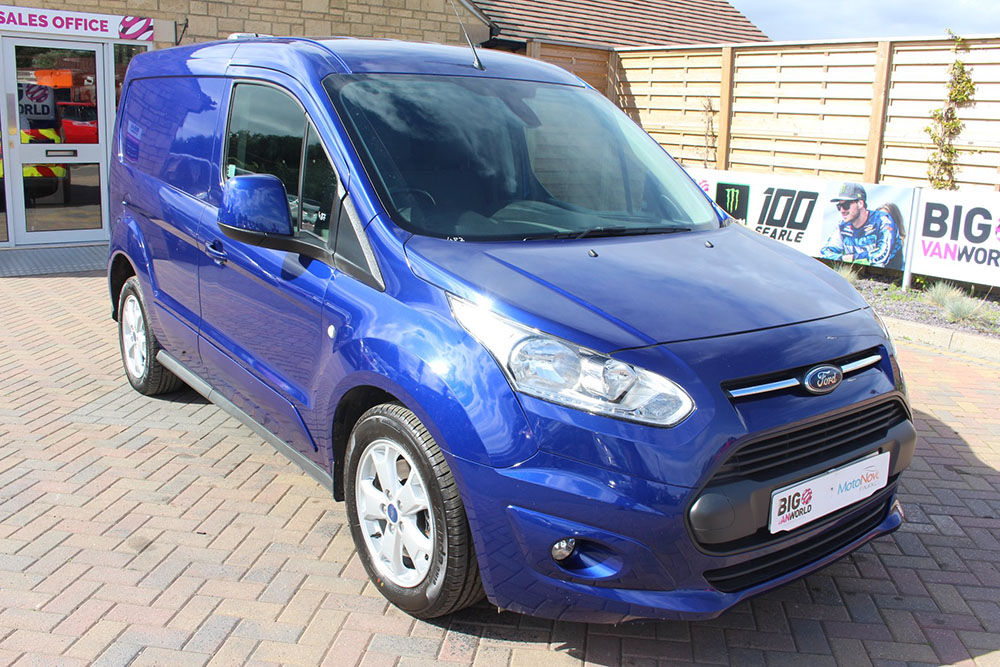 The Renault commercial range starts with the Kangoo which has been Euro 6 compliant since 2015 when a NOx trap was added to all of its engines. Despite being an unlikely partnership, the Kangoo is actually the basis for the Mercedes Citan small van which uses the same engine range.

As well as offering a range of Euro 6 diesel engines, the all-electric Kangoo ZE is also available which produces zero emissions, cuts the cost of tax and reduces the carbon footprint of your business.

However, if you want to stick with a traditional combustion engine, the Kangoo has a choice of three 1.5-litre dCi diesel units: 75bhp, 90bhp and 110bhp. These diesel variants promise excellent levels of fuel efficiency by projecting 64-65mpg.

The entry-level version is only offered with a manual gearbox and isn't available with the longer, Maxi body style. The more powerful 90 and 110 engines can both be paired with Renault's EDC automatic gearbox.

In the standard Kangoo, there's enough space for a single Euro pallet in the 3.0m³ load area. This increases to 4.0m³ in the Kangoo Maxi which can accommodate two Euro pallets with a standard payload of 800kg.

Most medium-sized vans will use Selective Reduction Catalytic (SRC) technology to reach the required NOx emission limits which involves adding an AdBlue tank. Although this can reduce the payload in some models, it helps to increase fuel efficiency and reduce CO2 emissions.

Despite being smaller, the updated diesel engines are actually able to deliver more power with 105PS, 130PS and 170PS options available. This represents improvements of 5bhp/50Nm, 5bhp/35Nm and 15bhp/20Nm respectively as they offer up 20% more torque at low revs, helping them to supply more low-end pulling power.

The engine upgrade has actually led to a 13% increase in fuel efficiency from the older Euro 5 model with fuel economy figures rising up to 46.3mpg on the combined cycle. The more powerful 130PS and 170PS are also available with the 6-speed SelectShift automatic gearbox.

In order to become Euro 6 compliant, the Transit Custom from September 2016 has a 21-litre AdBlue tank which is capable of achieving around 6,000 miles before needing to be filled up again. However, this hasn't affected the van's payload because Ford has increased the Gross Vehicle Weight (GVW) accordingly.

Ford took the opportunity to make a number of other changes to refine this model by introducing new driver assist technology and safety systems, such as pre-collision assist with pedestrian detection. 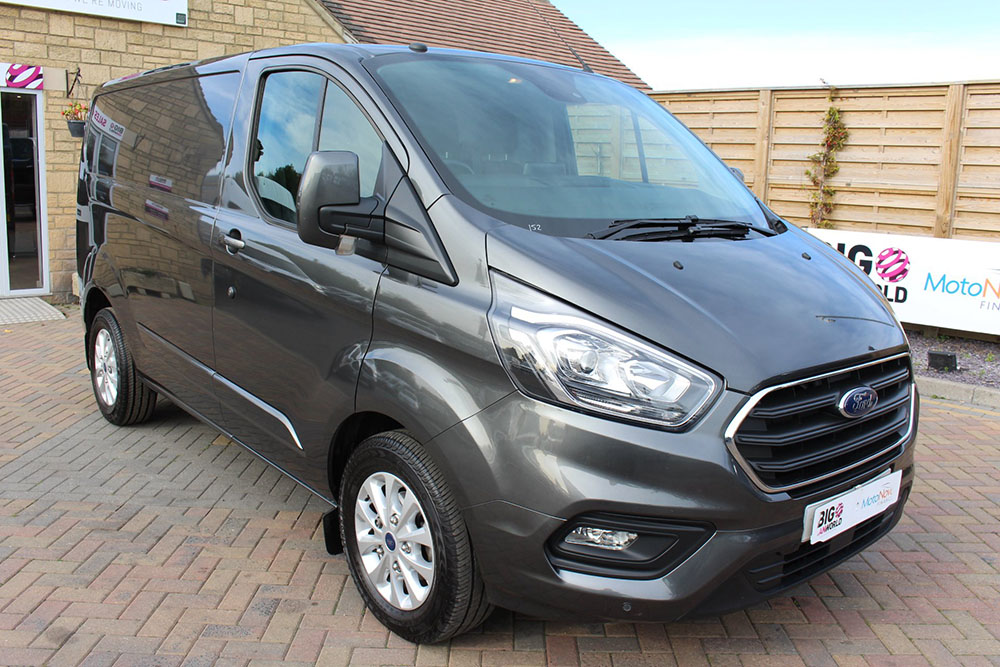 The Mercedes Vito is a premium van that offers both front-wheel drive (FWD) and rear-wheel drive (RWD) options with a choice of two different Euro 6 compliant diesel engines.

The FWD versions are exclusively offered with a smaller 1.6-litre four-cylinder unit from Renault which they use in their competitor Trafic model. This engine helps to reduce initial costs and there are two variants available: 88bhp and 114bhp.

Alternatively, there's a 2.1-litre engine that powers the RWD models offering outputs of 136bhp, 163bhp and 190bhp. As standard, both diesel engines are paired with a 6-speed manual gearbox which can be changed to a 7G-TRONIC 7-speed automatic transmission on RWD versions.

When equipped with the BlueEfficiency pack - which adds stop-start technology, low rolling resistance tyres and aerodynamic panels underneath the van - the Vito can achieve up to 49.6mpg on the combined cycle.

There are three load lengths to choose from with load volumes starting at 5.5m³ and reaching up to 6.6m³. Payload is dependent on whether you choose a FWD or RWD model with a maximum of 1,369kg. 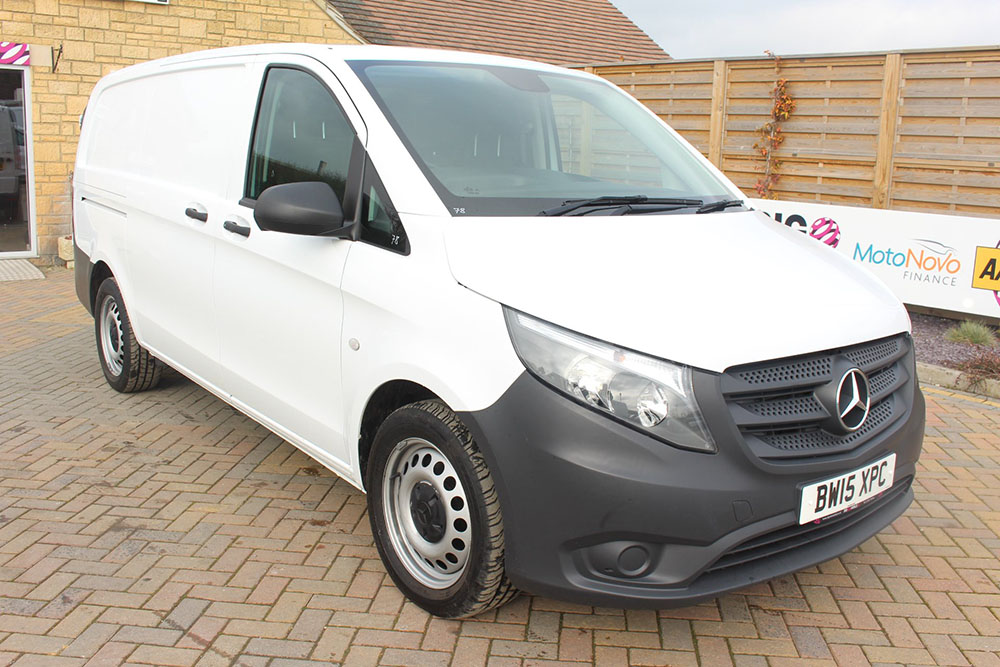 All three of these vans are practically identical because they all use the PSA group's EMP2 platform that has been reinforced with heavy-duty suspension to be able to cope with bigger and heavier commercial loads.

In 2016, the Dispatch, Expert and Proace were completely redesigned with new looks, improved safety technology and a range of Euro 6 compliant BlueHDi diesel engines.

The smaller 1.6-litre variant is available in 94bhp or 114bhp. The entry-level unit receives a 5-speed manual gearbox, whereas the more powerful version comes with a choice of a 6-speed manual or 6-speed ETG6 automated gearbox (except for the Toyota Proace which is only available as a manual van).

Alternatively, the manufacturers also offer a 2.0-litre diesel engine with 119bhp, 148bhp or 178bhp; however, the most powerful unit is only available in the top-spec trim level.

In terms of fuel economy, these vans are amongst the best in class. The most efficient engine is able to return up to 55.3mpg on the combined cycle. Similarly, they consume AdBlue at a slower rate than some rivals - the advanced SCR system means that the 22.4-litre tank should last over 9,000 miles.

Typically, manufacturers have chosen to develop Selective Catalytic Reduction technologies to reduce their NOx emissions by the required 55%, although it's not the only method. Fiat decided to implement an Exhaust Gas Recirculation (EGR) system in their Ducato large van.

If you don't want the 3.0-litre 190bhp V6 diesel unit, there's a four-cylinder 2.1-litre diesel engine with three variants to choose from: 95bhp, 129bhp and 163bhp. Each unit is paired with a 6-speed manual gearbox as standard, but a 7-speed 7G-Tronic plus automatic was available as an option.

In 2018, the third generation of the Sprinter was released with Front-Wheel Drive models offered for the first time. The introduction of the updated version has helped to reduce the price of Euro 6 second generation models.

The old Euro 5 model was only capable of achieving 32.1mpg, whereas the newer Euro 6 engines can return up to 35.8mpg on the combined cycle which can be improved further with BlueEfficiency technology.

With four lengths and three heights to choose from, the Sprinter is one of the most versatile large vans on the market, offering a load space from 7.8m³ all the way up to 17.0m³. 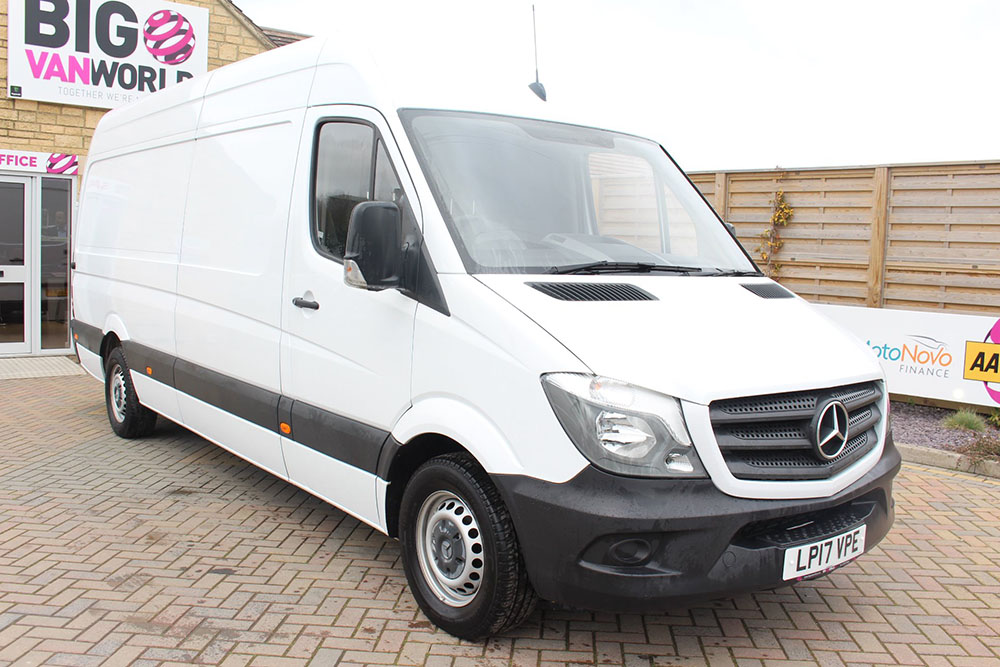 When the new model was originally launched, Peter Reyes, Ford of Europe's head of commercial vehicles, said "the challenge was to take our best-selling Transit and make it cheaper to operate, with improved performance and cleaner in terms of emissions".

Fuel economy has increased by 13% to an advertised 40.9mpg on the combined cycle, while CO2 emissions have been reduced to 174g/km. There's also a 21-litre AdBlue tank on-board to successfully implement the new SCR technology to cut NOx emissions by 55%.

Euro 6 Ford Transit models are around 41kg heavier than the previous versions. To compensate for this and retain the previous payload figures, Ford increased the Gross Vehicle Weight accordingly; however, the 3.5-tonne Transit was already at the upper weight limit for a light commercial vehicle, so there has been a reduction in its payload capacity.

Peter Reyes also explained that the Euro 6 Transit would be "quieter in the cabin, safer and even more durable". Noise has been reduced with the addition of new acoustic moulds around the engine bay, while a range of new driver assistance and safety systems were also introduced. 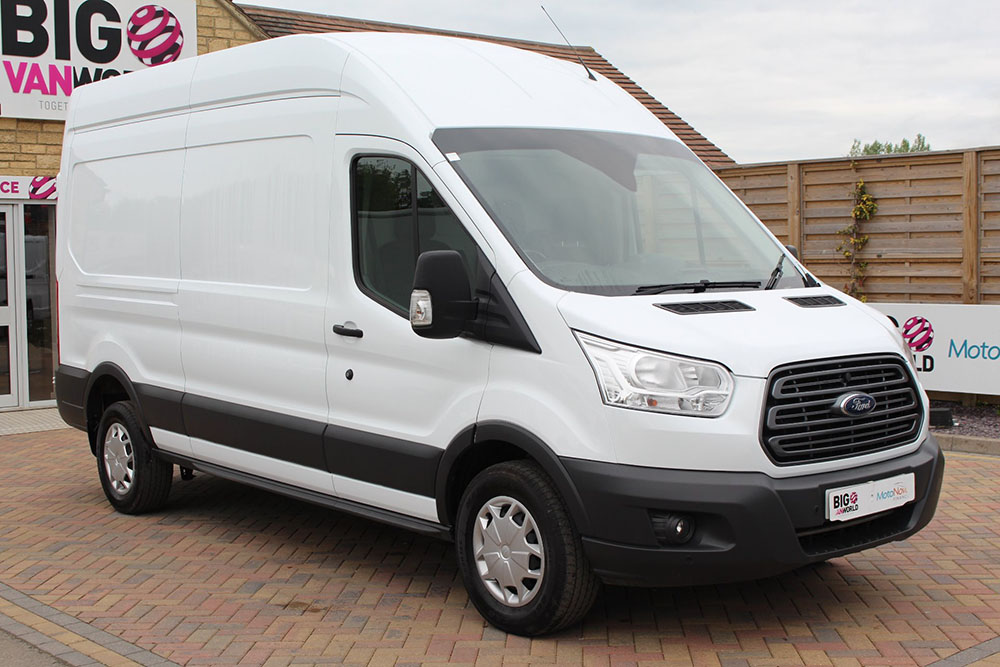 First launched in 1978, the Iveco Daily has had a number of refreshes in its time. The most significant recent update came in 2014 and led the Italian manufacturer's large van to scoop the coveted title of International Van of the Year 2015.

In 2016, the engine range was also updated to comply with the latest Euro 6 emissions standards. Unlike most manufacturer's, Iveco offered a combination of Exhaust Gas Recirculation (EGR) and Selective Catalytic Reduction (SCR) technologies.

There are two four-cylinder engines to choose between: a 2.3-litre unit and a 3.0-litre drivetrain. The smaller engine is available with both LP-EGR (Low-Pressure Exhaust Gas Recirculation) and SCR options, whereas, the bigger 3.0-litre variant is exclusively offered with SCR technology.

Iveco claim that the updated Daily E6 is 8% more fuel efficient with the EGR engine and 10% more frugal with the SCR version in place compared to Euro 5 models. Since 2017, new versions of the 140bhp and 160bhp 2.3-litre units have been made '2020 Ready' for the Real Driving Emissions (RDE) testing.

The Iveco Daily is one of the most versatile large vans on the market with load volumes from 7.3m³ up to a massive 19.6m³ created from five body lengths and three heights. Lorenzo Sistino, Iveco head of commercial vehicles, insists "it is not just a new product but two [...] the best chassis cab on the market and a van born to be a van".